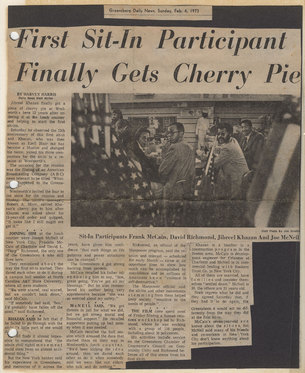 February 1, 1960 was the day Ezell Blair Jr., David Richmond, Franklin McCain, and Joseph McNeil inspired African Americans across the southern United States. These four males; known as the Greensboro Four, were against the inequality that only Caucasians were allowed to eat in a Woolworth restaurant in Greensboro, North Carolina. Day after day, the four college students would come and sit at the lunch counter until the café would close. Racial slurs would be said toward them by some of the employees working at the counter. The news about the sit-in spread around town, and the crowd of protestors began to get bigger each day. The Greensboro Woolworth lunch counter was desegregated by the end of July in 1960. The Greensboro sit-in made the African Americans have more self-confidence to desegregate other public places. Soon, blacks would gather around movie theaters, restaurants, motels, and other segregated places to protest. On February 1, 2010- the 50th anniversary of the lunch counter sit-in, International Civil Rights Center & Museum opened in honor of the event including the Greensboro Four and thousands of protests who participated in the Woolworth lunch counter sit-in.