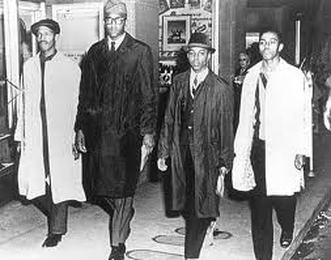 Segregation (the enforced separation of different racial groups in a country, community, or establishment) was common along the Southern United States during the 1960's. On February 1, 1960, Joseph McNeil, Franklin McCain, Ezell Blair Jr. and David Richmond walked into a Woolworth store in Greensboro, North Carolina and ordered coffee. The F.W. Woolworth store was public to anyone no matter their racial background, but the lunch counter was strictly for whites only. The students were denied service, ignored, and the manager of the Woolworth store requested that they leave. The four students remained seated until the store closed around 5 p.m, and returned to Agricultural and Technical University to report the news to other students. This sparked of the so called lunch counter "sit-ins."
The next day, February 2, thirty-five men, including the four freshmen, and four women returned to the F.W Woolworth store. The thirty-nine students sat at the lunch counter from 11 a.m to 3 in the afternoon. Reporters from both newspapers, a tv camera man, and the Greensboro police monitored the non-violent protest. When the news of the Greensboro lunch counter sit-in hit the news, students in the community embraced the idea of the movement. On February 6th, more than 1,000 people packed the store. Day after day, the number of people to come protest at the Woolworth store would increase. On July 26, 1960, the F.W. Woolworth store in Greensboro, North Carolina became desegregated.